The complete program of the 2017 edition of Europa in Versi  is available to consult: the pdf can be downloaded here.

The poets participating in the festival meet teachers and students.
The encounter will be moderated by Andrea Tavernati (Vice president of La Casa della Poesia di Como).

Introduction by Roberto Galaverni (literary critic and journalist)
“DI-VERSE” MEETINGS
The poets participating in the festival meet the public.
Free event, it's necessary to reserve a place by compiling the form that can be found at this link: www.lomazzoeventi.it/2017/europainversi

The poets participating in the festival meet teachers and students.
The encounter will be moderated by Laura Garavaglia.

The poets participating in the festival meet teachers and students.
The encounter will be moderated by Andrea Tavernati.

Ore 14.00 - Greeting of the local authorities by Laura Garavaglia
Greetings by Professor Maria Grazia Sassi (Councillor for culture of Casnate con Bernate, Provincial Counsellor, member of the national direction of Communes and Regions in Europe Ccre - CPLRE)
Introduction to the Festival by Roberto Galaverni
Short musical interlude played by the students of the Conservatorio of Como
The poets will be introduced by Wolfango Testoni (member of La Casa della Poesia di Como) e Andrea Tavernati (Vicepresident of La Casa della Poesia di Como)

H. 14.30 - Bruno Galluccio
Bruno Galluccio was born in Naples, where he still lives. He graduated in Physics and worked in a technology company where he handled telecommunications and spatial systems. His first poetry book was “Verticali” (Einaudi 2009), which was followed by “La misura dello zero” (Einaudi 2015).

H. 15.00 - Helen Soraghan Dwyer
Helen Soraghan Dwyer is the current chairperson of the Irish Writers’ Union. She produces and presents a weekly arts programme, Rhyme & Reason on Dublin South FM community radio station. Helen’s first collection of poems, Still-Faire, in English and Irish was published by Lapwing, Belfast, in 2010. Her second collection of poems, Beyond, also published by Lapwing, was launched in the Irish Writers’ Centre, Dublin, in 2011. Helen’s third collection of poems, in Irish, English and Romanian, published by Ratio et Revelatio, was launched in Timisoara, Romania in 2014. Helen has just completed a novel, Secrets, a coming-of-age story set in Dublin, Paris, Italy and New England.

H. 16.00 - Rubén Darío Lotero
Rubén Darío Lotero was born in Medellin in 1955. He graduated in Spanish and literature and obtained a Master in Teaching (History of Education in Columbia) at the University of Antioquia. Ruben was a professor of Spanish and Spanish literature (Spanish Agency for international cooperation – AECI), in Madrid, Spain. He is a poet, a historian, a writer and a researcher. He currently works in the educational institution INEM José Felix de Restrepo. In 1991 Rubén obtained the X National Poetry Award from the University of Antioquia with the book “Poemas para leer en al bus”. He also published poetry books, “Camino a casa” (Colección Autores Antioqueños, poesía, 2003) and “Papel de globo” (Universidad Eafit, 2004). In 1990 he published “Historia de la calle”, a collection of brief reports made by his young students from neighbourhoods marked by poverty, neglect and delinquency.

H. 16.30 - Ion Deaconescu
Ion Deaconescu is a poet, a writer, a novelist, a literary critic and a translator. He was born March 17, 1947. He graduated from the Faculty of Letters of the University of Bucharest and from the Faculty of Law of the University of Craiova. He teaches in the Faculty of Social sciences in the University of Craiova. Deaconescu published over 50 books among poetry collections, novels, critical pieces and translations and he obtained numerous award, nationally and abroad: the golden feather (FIROM Macedonia), the Racin award, the Trieste Poesia award, etc. He is the president of the International Academy “Mihai Eminescu”. His poetry has been translated in French, Italian, Portuguese, Serbian, Macedonian, English, Turkish, Hungarian and many other languages.

H. 17.00 - Marta Markoska
Marta Markoska was born in 1981 in Skopje, Macedonia. She published eight books, among which three poetry collections: “Black Holes Within Us” - second edition- which has been awarded twice with prestigious Macedonian awards: the “Todor Chalovski” Award in 2015 and the “Beli Mugri”in 2014; “Headfirst Toward the Heights” (“Aco Karamanov” Award in 2012), and “All Tributaries Flow Into My Basin”. She also published a Cultural Studies book “Culture and Memory”, the scientific paper “Discussion on Zen Buddhism: Religious and Philosophical Transcendence Between Eastern and Western Thought ", the essay collection “Hyper Hypotheses”, and the short story collection “Whirlpool in Bethlehem”.

H. 17.30 - Víctor Rodríguez Núñez
Víctor Rodríguez Núñez was born in Havana, Cuba, in 1955. He is a poet, a journalist, a literary critic, a translator and a scholar. He published around thirty poetry books across Latin America and Europe; his work has long been the recipient of important recognitions all around the Spanish-speaking world. Recently he received the coveted Loewe Poetry Award in Spain. Nunez wrote three anthologies that define his poetical generation, as well as curating another anthology on Cuban poetry of the XXth century - “La Poesia del siglo XX en Cuba” (2011). He curated various critical editions, presentations and essays on Spanish and American poets. Nunez is one of the most important contemporary Cuban writers and divides his time between Gambier, Ohio, where he teaches Spanish in Kenyon College, and Havana.

H. 18.30 - Haydar Ergülen
Haydar Ergülen was born in 1956 in Eskişehir, in Central Anatolia, in a family of Alevi faith. He currently lives in Istanbul. Ergülen studied Sociology at the Middle east Technical University of Ankara. His poems have been published, since 1979, on the most prestigious Turkish literary magazines. He participated in important periodical projects, he regularly holds public readings and writing seminars, on top of directing two literary festivals – one in Eskişehir and one in Istanbul. Ergülen is a very prolific writer, he has published fourteen poetry collections, essays on literature and cinema and a children's book of short-stories. His poetry books have won numerous literary prizes.

H. 19.00 - Giovanni Darconza
Gianni Darconza was born in San Gallo, Switzerland, in 1968. He is a poet, a storyteller, a translator and a professor of Literature at the Carlo Bo University of Urbino. He published the collection of poems “ Beyond the glass sheet” (2006 – winner of the “Jacques Prévert” 2006 competition), the novel “Searching for Nobody” (2007), the short-stories collection “The man in black and other wastes” (2009) and the children's tale “The word thief” (2013, Frontino Montefeltro Award 2014). For the publisher Raffaello Editore he translated an anthology of Latinamerican short poems (2015) and the anthology “Young Latinamerican poetry” (2015); he also translated Óscar Hahn poetry collections “Tutte le cose scivolano” (2015), “Scintilii in uno specchio rotto” (2016) and “La memoria degli specchi e altre poesie” (2016); by Antonio Cisneros he translated ”Il cavallo senza liberatore” (2015); by Mario Bojórquez “Divano di Mouraria” (2016); by Rafael Courtoisie “Umbría” (2016) and by Marco Antonio Campos “Dove andava il vento” (2016).

H. 19.30 - Cinzia Demi
Cinzia Demi (Piombino, LI) lives and works in Bologna, where she obtained a Second level Degree in Italian Studies. She is a cultural operator, a poet, a writer and an essayist. She directs the Poetry series for Pendragon, Minerva, Il Foglio. She curates the column “Missione e poesia” for the French-italian website Altritaliani. For UNIBO, she collaborates with the Contemporary Poetry Centre, with La Festa della Storia, and she is cited in the online Atlas of contemporary poetry “Ossigeno nascente”. She has had various of her works published. Among the artists she collaborated with for the staging of her texts are Raoul Grassilli, Gabriele Marchesini, Diego Bragonzi Bignami and Ivano Marescotti. Among the events she curates there is “A tea with poetry”, a series of encounters with international authors held at the Grand Hotel Majestic in Bologna. Demi is also the president of the Cultural Association “Estroversi”.

H. 20.00 – Monica Aasprong
Monica Aasprong was born in 1969 in Kristiansund on the Western Norwegian coast, and currently lives in Stockholm. She published four books, a novel and three poetry collections - “Soldier's Market” (2006), “An Invented Child” (2010) and “Circle Psalm” (2013). She works with installations and audio works, and her last book “Sirkelsalme (til Betlehem/til Jerusalem)” has been performed as an audio installation at Audiorama in Stockholm, as well as in a concert in collaboration with the Norwegian composer Maja Solveig Kjelstrup Ratkje at the Kunstnernes Hus in Oslo in 2013. “Circle Psalm” doesn't have a set beginning or end, its design plays with the endless shape of the circle too. One of Aasprong's poetry collections has been translated in Danish, and extracts from it in other languages as well – such as Spanish, Arabic, Hebrew, Dutch, French and Flemish. She has worked as editor and translator and is now part of the editorial board of Oslo Pilot, a project that investigates the possibilities of poetic texts in public spaces.

H. 20.30 – Refreshments
From H. 21.00 - Awarding ceremony for the International Poetry and Fiction Award Europa in versi

During the Festival from h. 14.30 to h. 16.00 the poet and literary critic Mario Satagostini will host a Poetry Workshop, widely appreciated in previous editions of the festival, during which he will offer critical opinions to all those in the public who wish to have their verses read.
To participate in the Workshop write to:
lacasadellapoesiadicomo@gmail.com

The event will be attended by jury members, including the President Milo De Angelis and Mario Santagostini.

The artists of Europa in versi
There will be an art show with the pieces realized by the students of the Academy “Aldo Galli”, inspired by the texts of the poets participating at the Festival.

Refreshments available during the event.

Students of the Jurisprudence, Economy and Culture department of the University of Insubria and of the Enaip Institute will be tasked with the organisational aspects of the Festival, such as welcoming the public and poets, managing the Poetry Workshop, etc.

HOW TO REACH VILLA GALLIA 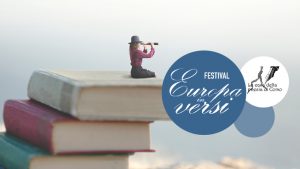